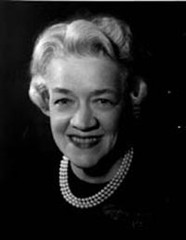 Margaret Madeline Chase Smith, born December 14, 1897 and died May 29, 1995, was an American politician. As a member of the Republican Party, she served as a U.S Representative and a U.S. Senator from Maine. She was the first woman to serve in both houses of the United States Congress. Chase is best remembered for her 1950 speech, "Declaration of Conscience," in which she criticized the tactics of McCarthyism. Smith was an unsuccessful in her candidacy for the Republican nomination in the 1964 presidential election. This, she became the first woman to be placed in nomination for the presidency at a major party's convention. Upon leaving office, she became the longest-serving female Senator in history.

I picked Margaret Madeline Chase because I have always been interested in student government and have always been involved with my elementary and middle school and currently uphold many leadership positions within my extracurricular activities. 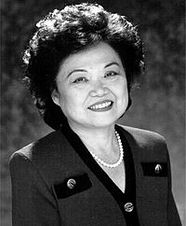 Patsy Takemoto Mink, born December 6, 1927 and died September 28, 2002, was an American politician from Hawaii. Mink was a Japanese-American and a member of the Democratic Party, and upheld the position as the Assistant Secretary of State for Oceans and International Environmental and Scientific Affairs. Mink served in the U.S. House of Representatives for twelve terms, representing Hawaii's first and second congressional districts. While in Congress, she authorized the Title IX Amendment of the Higher Education Act. Mink won her last election after her death in 2002. Mink became the first woman of color, and the first Asian-American elected to Congress. She also became the first woman elected to Congress from the state of Hawaii, and the first Asian-American to seek the presidential nomination of the Democratic Party in the 1972 election.

I selected Patsy Takemoto Mink because, like Smith, politics has always interest me and I've grown up with it because my dad always talks about it around the house either to my mom or on the phone with his friends. 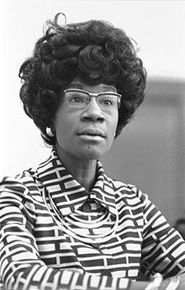 Shirley Chisholm, born November 30, 1924 and died January 1, 2005, was an American politician, educator, and author. From 1969 to 1983, she was a congresswoman representing New York's 12th Congressional District for seven terms. In 1968, she became the first African-American woman elected to Congress. On January 25, 1972, she became the first major-party black candidate for President of the United States and the first woman to run for the Democratic presidential nomination.

I selected Shirley Chisholm because her story caught my eye in how much women really can make history, especially those of color. Her ambition and drive encourages students like me to go out and pursue your dreams and passions no matter what your race or gender is.

Elizabeth Ann Seton, S.C. was born August 28, 1774 and died January 4, 1821. On September 14, 1975, Seton became the first native-born citizen of the United States to be canonized by the Roman Catholic Church. She established the first Catholic school at Emmitsburg, Maryland, where she founded the first American congregation of Religious Sisters, the Sisters of Charity.

Elizabeth Ann Seton story interested me because I was raised in a devout catholic family. I go to church every Sunday and I'm a strong believer of prayer. My sister attends a Jesuit college, Gonzaga University, causing Seton's story to catch my eye. 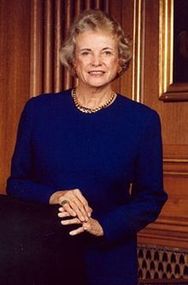 Sandra Day O'Connor, born March 26, 1930, is currently a retired United States Supreme Court Justice. She become the first woman to be appointed to the Court. Prior to O'Connor's appointment to the Court, she was an elected official and judge in Arizona and was Chancellor of The College of William & Mary in Williamsburg, Virginia, and currently serves on the board of trustees of the National Constitution Center in Philadelphia, Pennsylvania. Several publications have named O'Connor among the most powerful women in the world. On August 12, 2009, she was awarded the Presidential Medal of Freedom, the highest civilian honor of the United States, by President Barack Obama.

Sandra Day O'Connor interested me because her name sounded familiar when i first saw her name. I wanted to learn more about her and was interested in her role within society as being considered among the "most powerful woman in the world." 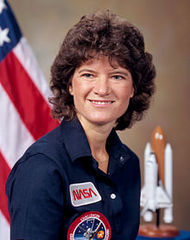 Sally Kristen Ride, born May 26, 1951 and died July 23, 2012, was an American physicist and astronaut. Ride joined NASA in 1978 and in 1983 she became the first American woman to enter in space. She left NASA in 1987 to work at Stanford University's Center for International Security and Arms Control and had served on the investigation panels for two space shuttle disasters--Challenger and Columbia-– making her the only person to serve on both. She co-authored six children's science books with her life partner of 27 years, Tam O'Shaughnessy and founded Sally Ride Science in 2001. Ride remains the youngest American astronaut to be launched into space.


Sally Ride's story had interested me because she became the first woman to go into space making profound history. My science teacher in middle school had a big poster of her in her classroom and was a big fan of her and NASA. 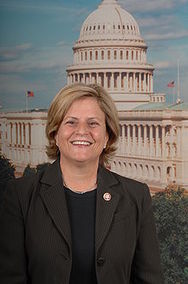 Ileana Ros-Lehtinen, born July 15, 1952, is the U.S. Representative for Florida's 18th congressional district and has served since 1989. She is a member of the Republican Party. She is currently the most senior Republican woman in the U.S. House, and was the first Republican woman elected to the House of Representatives from Florida. She was also the first Hispanic woman and the first Cuban-American to be elected to Congress. Ros-Lehtinen is chairwoman of the House Foreign Affairs Committee.

Ileana Ros-Lehtinen's interested me most because she represents a combination of all the things that matter most to me. She is hispanic, upholds a leadership role, and has made a difference in the world. 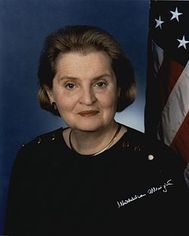 Madeleine Albright, born May 15, 1937, was the first woman to become the United States Secretary of State. She was appointed by US President Bill Clinton on December 5, 1996. Albright currently serves as a Professor of International Relations at Georgetown University's Walsh School of Foreign Service, and holds a Ph.D from Columbia University.  In May 2012, she was awarded the Presidential Medal of Freedom by US President Barack Obama. Albright also serves as a Director on the Board of the Council on Foreign Relations.

I chose Madeleine Albright because my mom has a secretary and because of Albright's story, I have come to an understanding of the significance that secretary's like Albright have in the country. 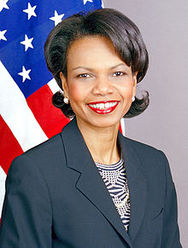 Condoleezza Rice, born November 14, 1954, is an American political scientist and diplomat. She served as the 66th United States Secretary of State, and was the second person to hold that office in the administration of President George W. Bush. Rice became the first female African-American secretary of state, as well as the second African American, and the second woman. Rice was President Bush's National Security Advisor during his first term, making her the first woman to serve in that position. Before joining the Bush administration, she was a professor of political science at Stanford University. Rice also served on the National Security Council as the Soviet and Eastern Europe Affairs Advisor to President George H.W. Bush during the dissolution of the Soviet Union and German reunification. In September 2010, Rice became a faculty member of the Stanford Graduate School of Business and a director of its Global Center for Business and the Economy.

Condoleezza Rice's story has influenced me in picking her because of the unique name she has being able to easily spot her out. Even though I was young and didn't know much about politics, I remember vaguely about the role she played in the White House. 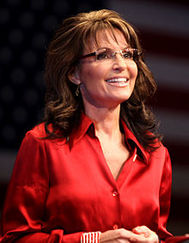 Sarah Louise Palin,  born February 11, 1964, is an American politician, commentator and author. As the Republican Party nominee for Vice President in the 2008 presidential election, she became the first Alaskan of a major party and first Republican woman nominated for the vice presidency. Since January 2010, she has provided political commentary for Fox News, and has hosted a television show, Sarah Palin's Alaska. Five million viewers tuned in for the first episode, making it a record for TLC. Palin became the youngest person and first woman to be elected Governor of Alaska. Ever since her campaign, she has endorsed and campaigned for the Tea Party movement, as well as several candidates in the 2010 midterm elections.

I chose Sarah Palin because of her profound mark she made on this country during the 2008 Presidential Election. Throughout the media, I have been hearing hateful comments towards Palin and have struggled to come to an understanding of why because I never was interested  in the campaign of McCain's Party.
Powered by