Cartoons Relating to the Role Women Uphold Within Society

"A Woman's Work Is Never Done" 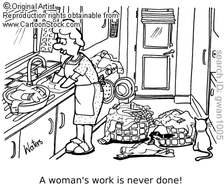 In this cartoon, the message being illustrated is that woman maintain uphold many responsibilities within their families and their outside life. Unlike men, it is essential for the woman in the household to do the housework and take care of children. Like stated in the quote, a woman's job is never finished and that the view of only women doing housework should be diminished. We, as humans, should come to appreciate the women in the world.

"Keep Her Where She Belongs..." 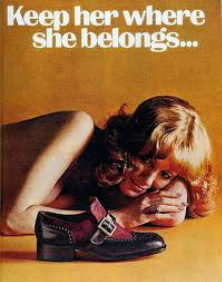 This picture represents an ad for a shoe. My perception of this photo when I first saw it was shame. In this ad, the woman is on the floor looking on the shoe with a caption saying, "Keep her where she belongs..." This ad may suggest that woman are degraded towards and remain at a standing below men, like at the level the shoe on a man is at. 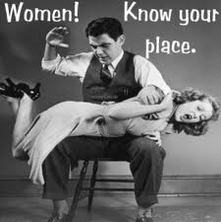 In this image, the man is punishing the wife with domestic violence. In today's world, domestic violence is illegal and requires disciplinary action; however, because of the black and white color, this image shows it was in mid 1900s when color wasn't even developed. Although times were different back then, it is still not right to treat women like how the man is treating the woman in this image. In marriage, the couple is to be each other's half. The women should not be viewed as less or as a wastrel.

"It's Nice To Have a Girl Around the House" 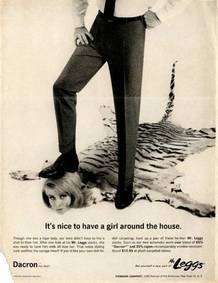 This image shows that a picture does say 1,000 words. This ad tells us women everything we need to know about sexism. In this ad for Mr. Leggs dress pants, a woman's head is attached to a tiger-skin rug.  A man, dressed as though he works, triumphantly places his shoe on the woman's head. The copy states, 'Though she was a tiger lady, our hero didn’t have to fire a shot to floor her. After one look at his Mr. Leggs slacks, she was ready to have him walk all over her. That noble styling sure soothes the savage heart!" Like the other images mentioned above, the women are still viewed as lower or less superior to men and are able to be stepped on like a rug on the floor. 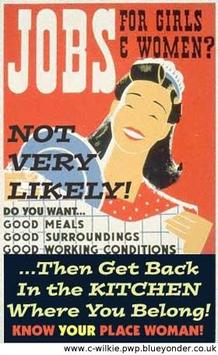 
This poster, by artist Albert M. Bender for the Illinois WPA Art Project, was used to promote domestic employment for women: “Jobs for girls & women. If you want a good job in household employment apply at – or write to Illinois State Employment Service.” The illustration was created between 1936 and 1941. Like the first picture mentioned, this image conveys that the only ideal role women play within society is to be a housewife and do housework. It is perceived that women are denied in trying to live past their ideal role and have no chance in pursuing any other career.
Powered by